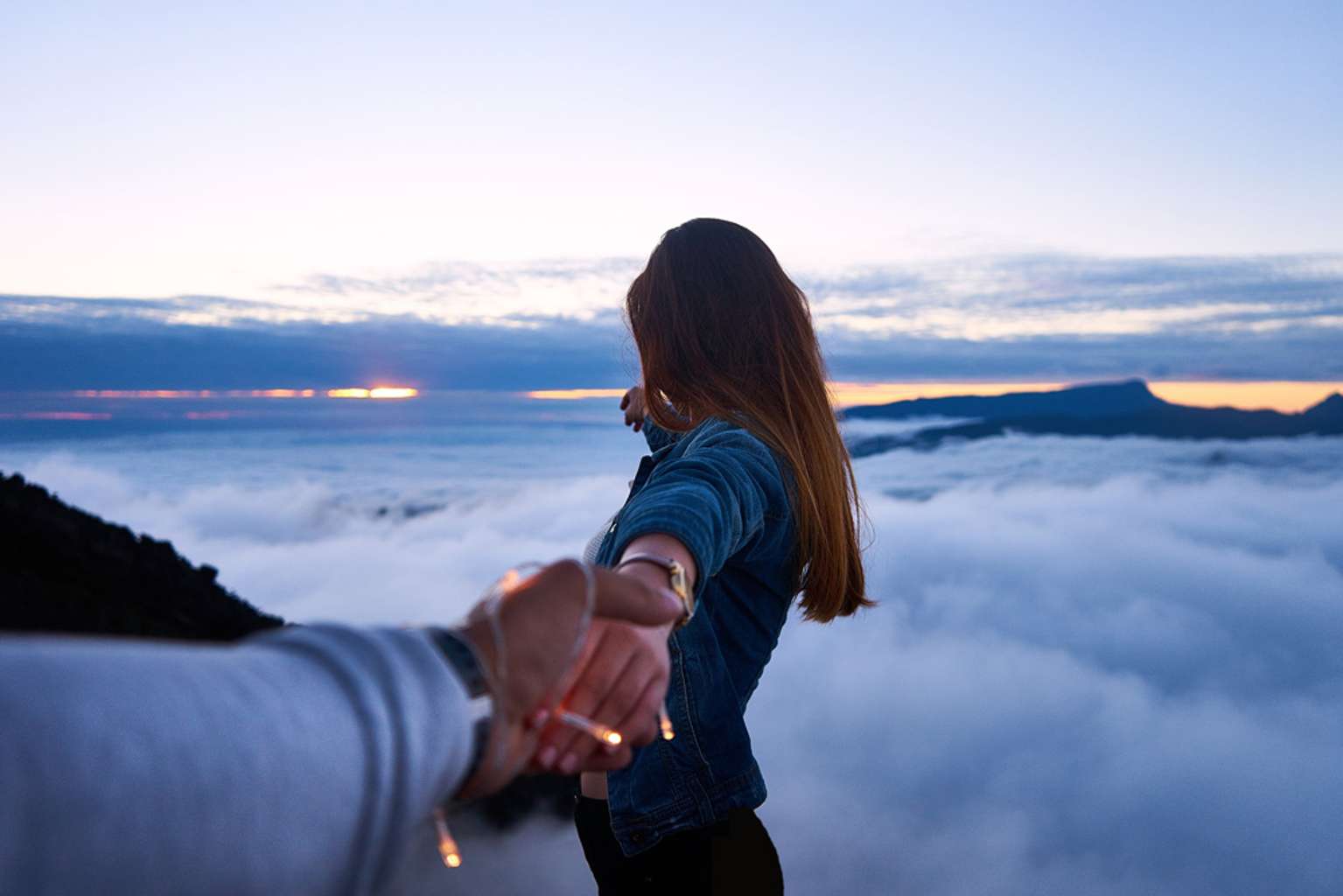 Fellas: Here’s 25 Ways To Tell If You’re In Love

Hey, it happens to the best of us: One minute, you’re perfectly happy living the single life and enjoying all the freedom and independence that comes with it. You do whatever you want all the time, you eat whatever you feel like, bang whoever will let you. Life is good.

But then, out of nowhere, you stumble upon someone who makes you think about giving all that up and settling down for good. She’s different from every other girl you’ve ever been with, you feel like you’ve known her forever and now that you’ve been lucky enough to find her, you don’t want to let her go.

Your friends make fun of you, because they’re guys and that means they’re pre-conditioned to believe (or at least publically profess) that true love is for pussies. But even the most cynical among them would probably admit under duress that we’re all looking for that special someone ourselves, so fuck ‘em.

Love, however, is a complicated beast, and if you’ve been a bachelor for a long time, you may not recognize it when you’re in it. So here’s a little list of some ways to tell if she’s really the one. If even half of these seem familiar, then I got news for you, slappy — you’re in love.

1. You Miss Her When She’s Not Around

Whether she’s leaving town on business, going back to her place on Sunday night or just getting up off the couch to use the bathroom, you miss her. The minute she’s gone, all your thoughts turn to her and you want her back by your side again.

2. You Start Eating Right And Working Out More

Sometimes when we’re single, we let things get a little soft and flabby, living off pizza three times a week and frequently foregoing visits to the gym. But when you’re with the right person, you always want to look and feel your best. You’re crazy attracted to her and you’re willing to do whatever you can to ensure she feels the same way about you.

3. You Think About Her When You Jerk Off

Not every time, obviously, but if the girl you’re actually screwing in real life also starts making appearances in your fantasies, that’s a pretty good sign.

4. You Want To Impress Her Parents

Unless she’s got some serious issues, she gives a damn what her parents think about who she’s dating. If it’s just casual, you don’t want to go anywhere near her folks, but if it’s the real thing, you not only want to meet them, you want them to like you. So get a haircut and iron your shirt — you’ve got people to impress.

Under normal circumstances, these things are intolerable. There’s hardly ever any boobs or car chases to keep your interest up. But if you’re in love, you’re more than willing to sit on the couch to watch whatever Kate Hudson or Rachel McAdams bullshit she wants to see.

6. You Spend Less Time With Your Friends

You’d rather spend most nights having candlelit dinners than hitting the strip clubs with the boys, and that’s perfectly fine. Just make sure you make time for guys’ nights every once in a while. You don’t want to lose yourself in the relationship. If it doesn’t work out for whatever reason, you might find yourself flying solo.

7. You Delete Your Booty Calls From Your Phone

If she’s Miss Right, then you find yourself willing to part with all the Miss Right Nows. In fact, you start wondering what you ever saw in them in the first place. Well — that’s not really true. You knew what they were good for. But now the thought of spending a few hours with these girls seems skeevy and depressing. You don’t need them anymore.

A lot of times, we pretend to be interested in whatever a girl is saying because we’re trying to bang her. But with this one, you find that you actually ARE interested. You like talking to her, you like hanging out with her. You like what you have in common and you like the ways you’re different. You can let your guard down and be yourself, like you do with your buddies.

10. You Don’t Mind So Much When You Find A Box Of Tampons In Your Bathroom

This is actually a pretty good test. When a male bathroom is violated by such a womanly item, it can cause feelings varying from disgust to rage if it doesn’t belong to the right girl. If you love her, though, you don’t really care. In fact, you kind of like that she feels comfortable leaving her monthly supplies over at your house. It means she plans on sticking around for a while and that’s what you want.

11. When You Talk About Your Sex Life With The Guys, You Leave Out The Details

When you’re in love with a girl, you don’t want your friends to see her as just your latest cum-bucket. You’re perfectly fine talking about the frequency and mind-blowing nature of the sex, but when it comes to the graphic nature of all the filthy things you do to each other, you leave your buddies in the dark.

When you’re not that into a girl, you tend to add up every little penny you drop on a date or a gift and try to figure out if she’s worth what you’re spending on her. When it’s the right girl, though, you don’t care. Hell, you want to spend the money on her.

Whether it’s for your friends, family or total strangers, you’re proud to have this one by your side. You feel like it elevates your status that she’s with you. And it’s not just because she’s super-hot. She’s the total package and you want everyone around to know that she chose you.

14. You Find Yourself Thinking Of The Future

When you’re just messing around, you sure as hell aren’t going to make any long-term plans. Even buying tickets to a concert six weeks away feels like a huge risk. But if you’re having thoughts of family, weekends away, maybe even moving to the suburbs … well, chances are, she’s a keeper.

15. You Care What She Thinks

16. You Know Her Flaws And You Don’t Care

She’s not perfect, but neither are you. When you’re looking for reasons not to be with someone, you tend to focus on their flaws as reasons to hit the bricks. But if you actually find her annoying laugh to be charming and you think that crooked front tooth is really cute, you’re done, son.

17. You Can Tell Her Anything

You’re upfront and honest about your sexual history, your secret hopes and dreams, that time you killed a guy, etc. You want her to know everything about you and accept you for it. And if she can handle whatever you throw at her, then odds are she loves you, too.

When you experience actual grown-up feelings like love, you start to assess your lifestyle. If you’ve been staying with your mom or acting like life’s one big frat party, the right woman can make you start thinking about putting childish things away and to start acting like a goddamn adult. Out with the beer bong and paper plates, in with the martini kit and china.

First off, if you’re fighting at all, you can bet that you already have more than a passing interest in this girl. When we don’t give a good goddamn about her, it’s easier just to say fuck it and not even bother arguing. But if you actually care about coming to an agreement rather than just being “right,” it means you have long term goals in mind.

Robert Palmer got it right. You can’t sleep, you can’t eat, your mind is always racing and you’re overcome with alternating waves of giddiness and nervousness. It’s weird that falling in love turns you into an emotional wreck and makes it hard to focus on your work, your studies, anything but her, really. But if you find that you’ve suddenly become a blithering idiot, you’re a lucky man.

21. You Want To Be A Better Person

This one’s kinda corny, but it’s true. We tend to put the people we love on pedestals, and then try to make ourselves worthy of them. Like most things in life, this isn’t bad unless you go overboard with it, but genuinely wanting to lead a better life is always a good thing, and if she’s bringing that out in you, stay with her.

Those of us who are set in our ways claim that we’ll never compromise anything, and we act like that’s a virtue. But if you stick to your guns on that, you’ll always be alone. Relationships are all about compromise, and if you’re letting some things slide to keep her happy, then you’re growing up. Just make sure you know the difference between compromise and sacrifice, because while the formal is crucial, the latter is something you want to avoid.

23. You’re Protective Of Her

You’re her knight in shining armor and all that shit, and you take that responsibility seriously. You won’t let her fend for herself if she’s being picked on, if she’s having a rough time, you do what you can to alleviate her stress. You care about her and want her to be safe — and to know you’ll always be there for her.

Suddenly realizing you’re happy is a weird feeling. You may have thought you were happy before, but you were wrong. Now that you’re with her, the sky is bluer, the grass is greener, people are nicer. She’s having a positive effect on you and your outlook on life and that’s a really great thing.

25. When The Excitement Wears Off, You Still Want To Be With Her

A lot of the dizzying feelings you get from being in love are the same as if you were just infatuated. But when “the thrill is gone” as they say, and you’ve gone from having sex twice a day to twice a week, if you still want to be with her and only her, I got news for you, buddy. You’re sorry ass is in love.

Report Comment
yet another great article chuck! this one the one you wrote on independent women helped me a lot. got be on top of my game for this one and you have helped a lot. thank you