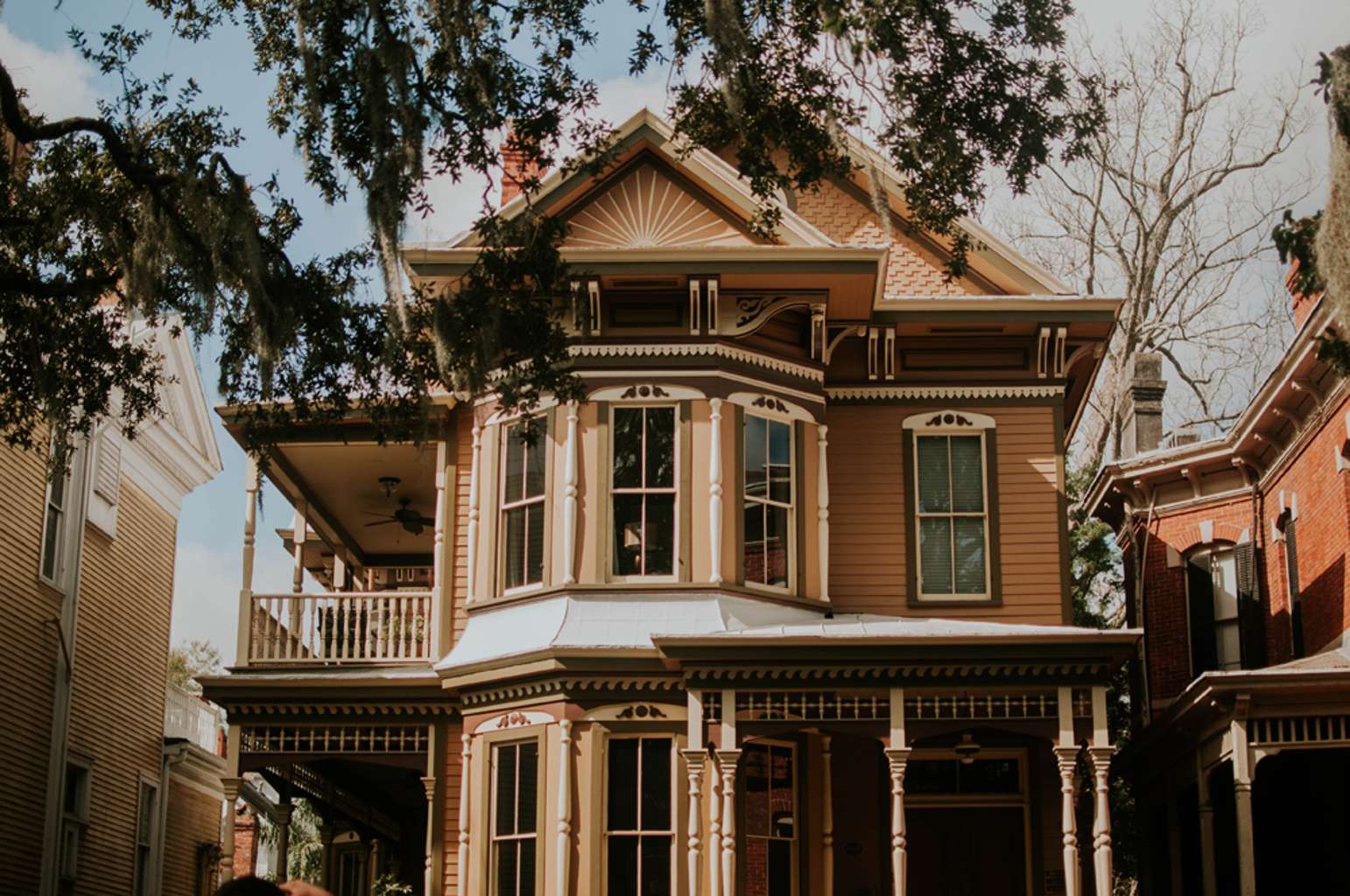 27 Reasons Why Georgia Is The Absolute Best State

Almost everyone thinks their home state is the best place in America, but that claim is really only true if it comes out of a Georgian's mouth. From sunshine to sweet tea, here are 27 reasons why the Peach State is the greatest state of all.

No other brand has ever been so iconic as Coca-Cola, and that brand happens to call Georgia home. Its roots in the state date back to 1886, when Atlanta pharmacist John S. Pemberton created it. That's a pretty huge claim to fame.

As long as we're on the topic of iconic things, one of the most famous movies ever to be filmed was set in Georgia. If that doesn't impress you, then these famous words from Scarlett O'Hara are for you: "Frankly, my dear, I don't give a damn."

Ray Charles. Little Richard. James Brown. REM. The B-52's. Zac Brown Band. Alan Jackson. That's just the tip of the iceberg. Georgia has shared its incredible talent with the rest of America and the entire world. You're welcome, everyone.

4. It has a beautifully varied landscape.

Georgia is home to beaches, mountains, swamps, and flatlands – all of which are incredibly beautiful. Cumberland Island has wild horses, and the Applachian Trail begins in the North Georgia Mountains.

If you live in Georgia, you'll never need to buy a ridiculously huge winter coat or snow boots. The Peach State has a temperate climate, barely ever sees snow, and sees the sun almost every day. The northeast can keep their terrible winters.

When Georgia decided to offer a generous tax incentive for movies to be filmed in the state, Hollywood came knocking. That began in 2005, and the state has seen a steady stream of TV shows and movies filmed there since then. In fact, Georgia is now the #3 filming location in the United States, after California and New York. It doesn't hurt that the state is so pretty and has so much to offer on the big screen (see #4).

7. No one can compete with our food.

Southern food is the best kind of food, and Georgia cooks up some of the most delicious fried chicken and cornbread you'll ever taste. And of course no meal is complete without a glass of sweet iced tea and peach cobbler.

The Varsity is an Atlanta institution where hurried staff shout "What d'ya have?" and you shout back things like "Naked Dog" or "Glorified Burger." It's an amazing place, and the onion rings are to die for. If you ever find yourself there, a quick glance at any of the walls will show you that it's a favorite among celebrities and presidents passing through the city.

This movie theater was a really big deal when it opened in 1929, but it was later threatened with demolition in the 1970s. That prompted Atlantans and famous names like Liberace and Lynyrd Skynyrd to rally to save the Fox, and the city ultimately refused to issue a demolition permit. It stands proud in the city today, and serves as a venue for live events.

When General Sherman went on an arson spree across the South during the Civil War, he spared the city of Savannah. There's an old legend that says this was done because the city was just too beautiful to burn. While that's unproven, it's certainly plausible. It's a city of historic homes, public squares draped with Spanish moss, and southern charm that can't be found anywhere else.

Athens, home to REM and the B-52's, is consistently ranked as one of the best college towns in America. There are 80 bars downtown, which means it has the most bars per capita than any other city in the country. And it's home to the University of Georgia. Go Dawgs!

North Georgia is home to a cute little town made to look like a German village. It hosts an Oktoberfest every year, has the Chattahoochee river flowing straight through it, and is a great place to spend a weekend.

Atlanta's Hartsfield-Jackson International Airport boasts five runways and sees 104 million passengers each year. No matter where you want to go in the world, there's probably a flight going there from Atlanta. That's a great thing for anyone who loves to travel.

14. It's where Cabbage Patch Kids are born.

Georgia happens to be the birthplace of the creator of the Cabbage Patch doll, Xavier Roberts. This means that Georgia is also home to Babyland General, a "hospital" where dolls are born under a magical tree and delivered by a human. It's a spectator sport, with one lucky audience member providing the name that will be featured on the doll's birth certificate. It's super creepy, but also great.

Georgia uses lottery funds to provide students with the HOPE Scholarship. It's open to all residents, and pays the bulk of their tuition if they maintain a B average at an in-state public school. They even get a book allowance each semester. It's incredible.

16. It beams lasers on a huge chunk of granite.

Stone Mountain is a Georgia landmark which happens to be one of the largest single masses of exposed granite in the world. The best part about it is the Laser Show, where you can spread out on a blanket and watch a terribly cheesy light performance unfold on the side of the mountain. It's a beloved Georgia tradition.

Head to Providence Canyon, take a photo, and your friends will think you're at the Grand Canyon. However, you'll actually be two hours outside of Atlanta.

People from Georgia have manners. We say "please" and "thank you," and we always compliment your mama's cooking. Come to Georgia with an attitude and you might get a good talkin' to on the benefits of being polite.

19. The aquarium is outstanding.

When it opened in 2005, the Georgia Aquarium was the largest in the world. It no longer holds that title, but it's still awesome. There's more than 10 million gallons of water and 700 species, and it's the only aquarium in the world that lets you swim with whale sharks.

20. It has the Clairmont Lounge.

Ask a local about Atlanta's Clairmont Lounge and there's a good chance they'll tell you it's where strippers go to die. Senior citizens dance on tables, and one particular dancer has a knack for crushing beer cans with her boobs. The bathroom door is a shower curtain, and drinks are served in plastic cups. This local hangout is a rite of passage for anyone visiting Atlanta, and often attracts major celebrities.

22. Ray Charles sang the prettiest song ever about it.

"Georgia on my Mind" by Ray Charles remains the most beautiful song ever written about a state. Tennessee's "Rocky Top" is an abomination compared to it. There's also a huge list of other songs written about the Peach State, from "Chattahoochee" to Midnight Train to Georgia." It's a state worth singing about, that's for sure.

23. It's home to the oldest public university in the United States.

The University of Georgia is a great college with a stunning campus and football weekends that redefine the meaning of tailgating. It also happens to be the oldest public university in the US. Admittedly, two other colleges have the same claim...but the author of this article went to UGA. Therefore UGA is right.

Georgia Tech is one of the best colleges in the nation for engineering, which means it attracts some of the most promising geeks out there. All jokes aside (and there are many), Georgia Tech is an awesome school that offers a stellar education. It also gets points for being public (read: affordable). Take that, Ivy League jerks.

If you've ever stumbled into a Waffle House at 4am in search of some smothered hashbrowns, you have Georgia to thank for it. Enough said.

CNN is a pretty remarkable company, considering it was the first 24-hour news network. Like so many other companies, it calls Georgia home.

A Georgia accent is music to anyone's ears. If y'all don't agree, then bless your sweet little hearts.

Report Comment
FINALLY SOMEONE AGREES WITH ME. I've had this argument so many times with people why Georgia is the best.Everything about the great GA is right in this article, everything is so good in Georgia(except the racists).

Report Comment
Ray Charles didn’t write “Georgia on my Mind.” Hoagy Carmichael wrote the score and Stuart Gorrell wrote the lyrics the year Ray was born. There’s some speculation that the song isn’t even really about the state, but rather about Georgia Carmichael, Hoagy’s sister.

1
Show All Comments (3)
From VOICEDMARKET
What’s this?