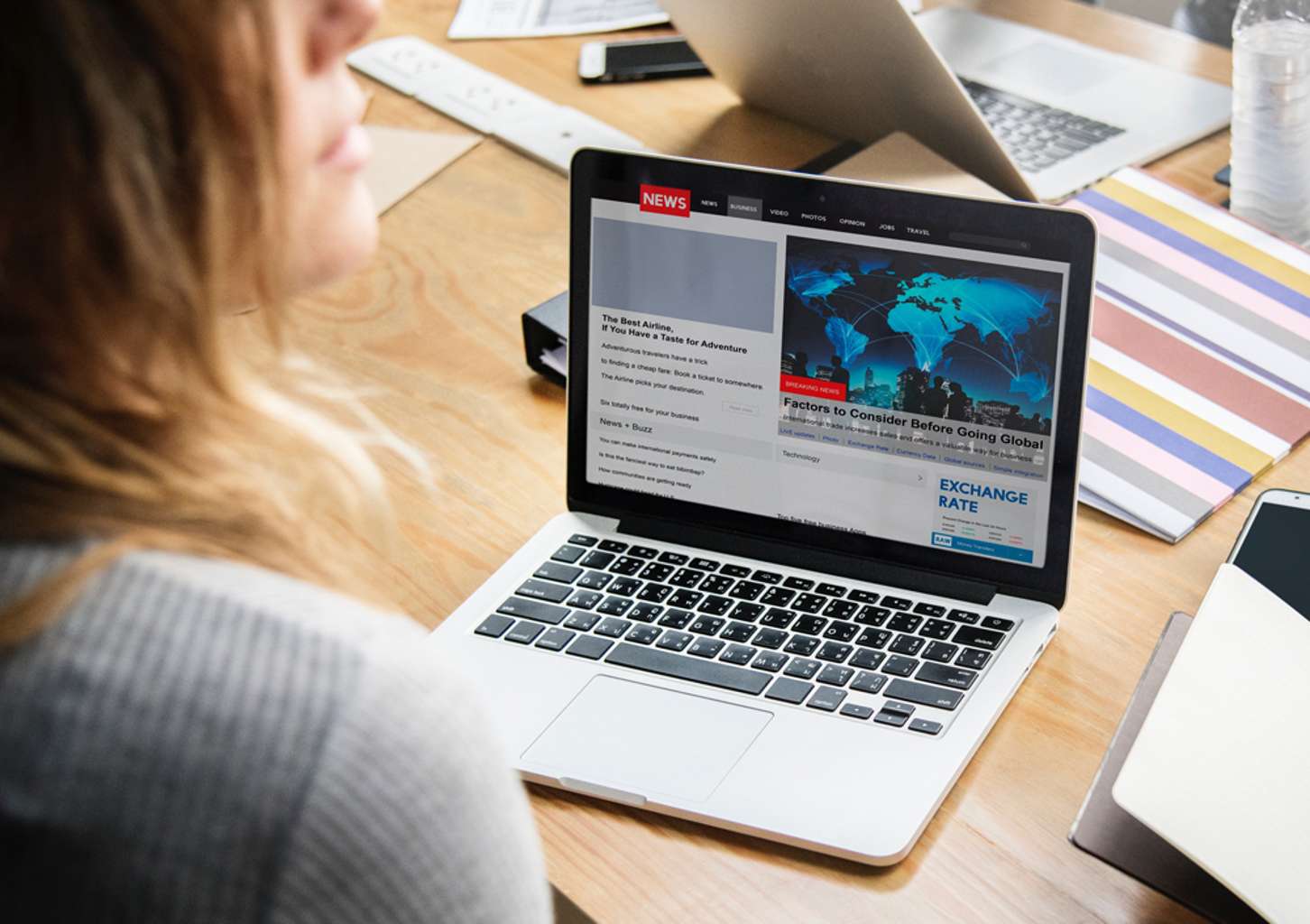 22 Things They Don't Tell You About Being A Journalist

Journalism is often portrayed as a glamorous profession filled with exciting events and interviews with famous people. That's part of it, but there's also a lot more to the job. Here are 22 things they don't tell you about being a journalist.

1. The newsroom is an amazing place.

Things happen here – how could they not? It's a 24-hour space full of eager journalists working hard to break the next big story. This is especially true in an international newsroom, where reporters are covering headlines from all over the world, at all times. That's a lot of news, and a lot of excitement. It's awesome.

Every newsroom across the world has the same story to tell – it's an emotionally charged place, because everyone is working on a time crunch. Editors are likely to be yelling at someone at some point in the day, but it doesn't take long to develop thick skin and realize that no matter what is said in the heat of the moment, it's all going to be forgotten once things slow down and everyone has a chance to breathe.

3. It can feel intimidating (especially in the beginning).

In many professions, a new job means being met by someone from human resources, meeting the team, perhaps going out for lunch together, and learning the ropes slowly. That's rarely the case for anyone who begins a job in journalism. You're more likely to feel ignored and in the way when you're first thrust into the newsroom, because everyone is simply so busy. Then one day, you'll be handed your first substantial (and terrifying) task. This is a good time to practice the phrase "fake it 'til you make it."

When you spend your days covering breaking news, which means doing everything as fast as you possibly can, you start to do other things quickly and efficiently as well. This often means that when a friend tells a story, you're ready for them to speed it up and give you the basic points of who, what, when, where, why, and how. No need for useless embellishments. It's not the greatest quality, but it's real.

Journalism is a demanding job, whether you spend your days as an on-air reporter, a print journalist, a producer for a radio broadcast, or doing any other job in the field. News doesn't work on your schedule, so if a big story comes in right as you were grabbing your keys and putting on your coat, there's a good chance you're going to be expected to stay and help cover it.

6. ...And when you finally leave, you'll probably go to the bar.

Let's face it, a stressful day at work often calls for an adult beverage (or three). It's a way to decompress after long shifts, bossy editors, and non-stop breaking news. It's also a great way to build camaraderie with your co-workers. This is important, since journalism often involves teamwork and working together under tight deadlines.

Very few journalists work traditional Monday to Friday jobs. Even if they do, they probably don't work 9am to 5pm. It's normal to work nights and weekends, especially when you're just starting out, which means it's common to have random days off in the middle of the week. But look at the bright side – it gives you the chance to taunt your friends when they have to wake up early on a Monday morning and you get to lie in bed as long as you want. Of course, they can taunt you when Saturday rolls around and you're headed to the office at 7am.

8. You become desensitized to just about everything.

When you spend your days covering tragic events, from bombings to car crashes, you become less and less affected by such events. It's not that you aren't human, it's just that you need to keep your sanity by refusing to dwell on them. It's the same tactic used by doctors and nurses.

9. You think talking about world affairs at the bar is totally normal.

Your friends just want to have a good time and talk about last night's episode of The Bachelor. You want to talk about the upcoming summit between Donald Trump and Kim Jong-un, or the rising success of bitcoin.

It probably comes as no surprise to find out that television personalities typically think very highly of themselves. Sometimes it's amusing, other times it's pathetic. Get used to it.

11. It's more competitive than you thought.

Everyone knows journalism is a hard field to break into, but most people aren't prepared for just how competitive it really is. You're competing with other journalists for the next big assignment, major interview, or promotion. This breeds jealousy in a lot of a people, which is perhaps one of the most unpleasant aspects of the job.

When you work crazy hours, routine goes out the window. It's perfectly normal to grab a pack of Doritos and a Snickers from the vending machine and call it dinner. You won't be judged, because everyone else is doing the same thing.

13. Being on screen isn't all glamour.

It's exciting to be on camera, but it's also extremely stressful. Just think about it – you have an entire newsroom of people, including all of your bosses, watching your delivery. Your report is live, so there's no room for mistakes. You need to make sure you deliver the correct information, don't forget what you need to say, and report in a way that makes the network proud. If you make a mistake, you'll end up on YouTube and potentially lose your job. But hey, no big deal.

You don't have to be a total jerk, but you do need to remember that journalism is a fast-paced, competitive field. This means elbowing your way to the front of a press conference, shouting your questions as loudly as you can, and standing your ground. It also means accepting that as a member of the media, a lot of people won't want to talk to you. A good journalist still finds a way to make it happen.

15. You need to know how to do everything.

Once upon a time, news organizations had a lot more money. That was before newspapers and magazines started closing their doors and everyone on Twitter became a "citizen journalist." Now, instead of having a huge team consisting of a cameraman, reporter, video editor, and producer, many TV journalists are expected to do everything. In other words, if you can't shoot and edit footage, you probably won't get the gig.

Diane Sawyer and Katie Couric are doing just fine, but entry-level journalism jobs (particularly at the local news level) quite often pay peanuts. There's room for growth and you can certainly make a decent living, but the majority of people never hit six figures as a journalist. That's okay though, because we do it for the love of news, and nothing else.

17. You have to teach yourself information in record time.

If you're a general assignment journalist, you're covering everything. You might have just completed a story on an earthquake in Japan when you're given a breaking news story on the Iranian government. But wait, you don't know much about the Iranian government. Better learn quickly. You have literally seconds to figure out what's happening, and then a few more minutes to add relevant background. It's a crash course, and failing isn't an option.

18. You'll experience every emotion in a day.

Most journalists will tell you they experience everything in a day – excitement when they get to cover a story, stress when they're running against the clock, frustration when their editor doesn't like the way they did something, and a feeling of accomplishment when it's all over. It's a roller-coaster, but that's part of the fun.

There's nothing better than completing an assignment you're proud of, and having the story go out to the world. Whether you've exposed a scandal, helped a victim find their voice, or covered a hilarious story that goes viral, journalism is extremely gratifying.

20. The best colleges in the world can't prepare you for the real thing.

Every year, graduates receive diplomas from America's top journalism schools. Most of them are unaware that while their education is a great foundation, there's only so much you can learn in a classroom. No teacher can prepare you for what is about to come, because the only way to truly learn is to be thrown into the circus known as the newsroom.

It's normal for a business person to prepare for a big meeting, or for a lawyer to spend countless hours coming up with the best way to address the jury in a trial. But journalists don't have that luxury, because the news is never planned. Each day when we go into work, we're clueless about what we'll be covering. Will it be a relatively slow day, or will it be one of the biggest news days in history? Who knows!

22. It's more subjective than you think.

It may seem as though journalism is only about facts...but what happens when three major events happen at the same time? Which one do you run as the top story? And which takes second place? There's often no clear-cut answer to this, and there will almost always be differing opinions in the newsroom. This is because each story has so many layers and tugs at each person in a different way. A good journalist is always ready to debate the merits of stories on a regular basis.

There you have it – the good, the bad, and the ugly of being a journalist. But you want to know a secret? It's a pretty awesome job, even on the bad days.