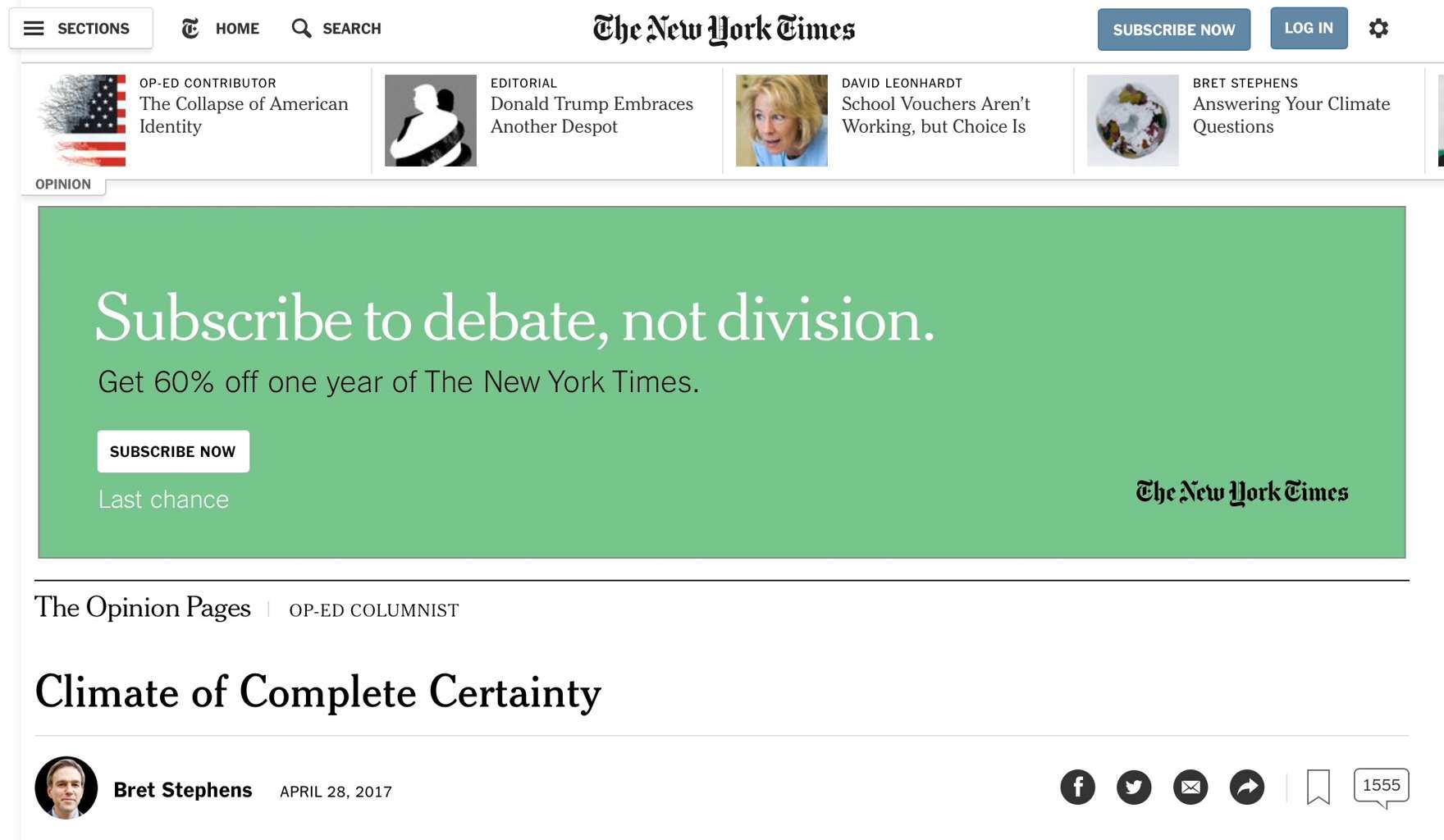 On April 28, the newest member of the New York Times Op/Ed section, Bret Stephens, wrote a column about the dangers of certitude in the realm of climate change. Though compelling, the column left something to be desired when it came to logical reasoning and conveyed a lack of consistency in that logic. The column also warned of being absolutely certain of the data of climate change, climate science and climate scientists.

On April 29, Democrats, eco-friendly celebrities and environmental activists across the country publicly shamed the NYT — mostly via social media — and claimed they were cancelling their subscriptions while encouraging others to do the same.

Stephens, a 2012 Pulitzer Prize winner, was recently hired on to the NYT staff in order to appeal to a larger demographic, namely Republicans and right-leaning moderates. Long accused of being liberally biased, the NYT, along with most traditional news outlets across the country, has sought to reverse — or, at the very least, slow — the trend of declining print subscriptions and the subsequent loss in ad revenue. To both combat declining sales and a biased reputation, the NYT logically assumed hiring a conservative columnist with a Pulitzer on their resume might appeal to readers outside their base.

Though there are numerous problems with Stephens’ column, particularly the comparison of climate science to political science and polling, the bigger issue is not the column itself but the reaction to it. The immediate and emotionally-charged call to boycott the NYT was a petty and immature reaction. Cancelling a newspaper subscription because you disagree with one column is akin to walking away mid-argument with your spouse and threatening to end the relationship.

Essentially, it’s an attempt to force your media outlet of choice to publish what you want to read with the facts and opinions you want to read. The credibility of the media has long been in question with the foundation of cable news, whose sole concern is the bottom line. Cancelling subscriptions because you don’t agree with what’s published undermines that credibility, especially when news directors and editors cave to the monetary pressure of mass cancellations. It becomes counterproductive and destroys civil debate.

The media, as much as we may satirize and demonize it, is essential to the democratic process and to ensuring a transparent government. It’s an added check and balance on the federal and state politicians across the country. There’s a difference between holding the media accountable and holding them hostage. By cancelling subscriptions and threatening to damage their credibility even further, we are holding them hostage and destroying the objectivity we so desperately need from journalists.

While I will agree hiring the likes of Bret Stephens — an avid climate change skeptic and sensationalist commentator — was not the best choice for the NYT, particularly in the age of alternative facts and outright lies from the current administration, I will also agree that Stephens’ column endangers the credibility of scientists which in turn damages the education system.

Where I draw the line, however, is in walking away from the debate and choosing to destabilize what may be the most important de facto branch of government. The media earns credibility through the honest and objective reporting of the news and the people return that credibility by participating in the debate and showing civility to those with whom they disagree.

Instead of cancelling subscriptions or boycotting the NYT, we should instead write letters and emails to the editors of the NYT. We should implore credible and well-known scientists to refute the claims of Mr. Stephens, both in the NYT and through social media. In short, we should find a better way to disagree with Brett Stephens and the decision of the NYT editorial board to hire him in the first place. Cancelling subscriptions and boycotting one of the oldest and most credible news sources in the country is immature and counterproductive.