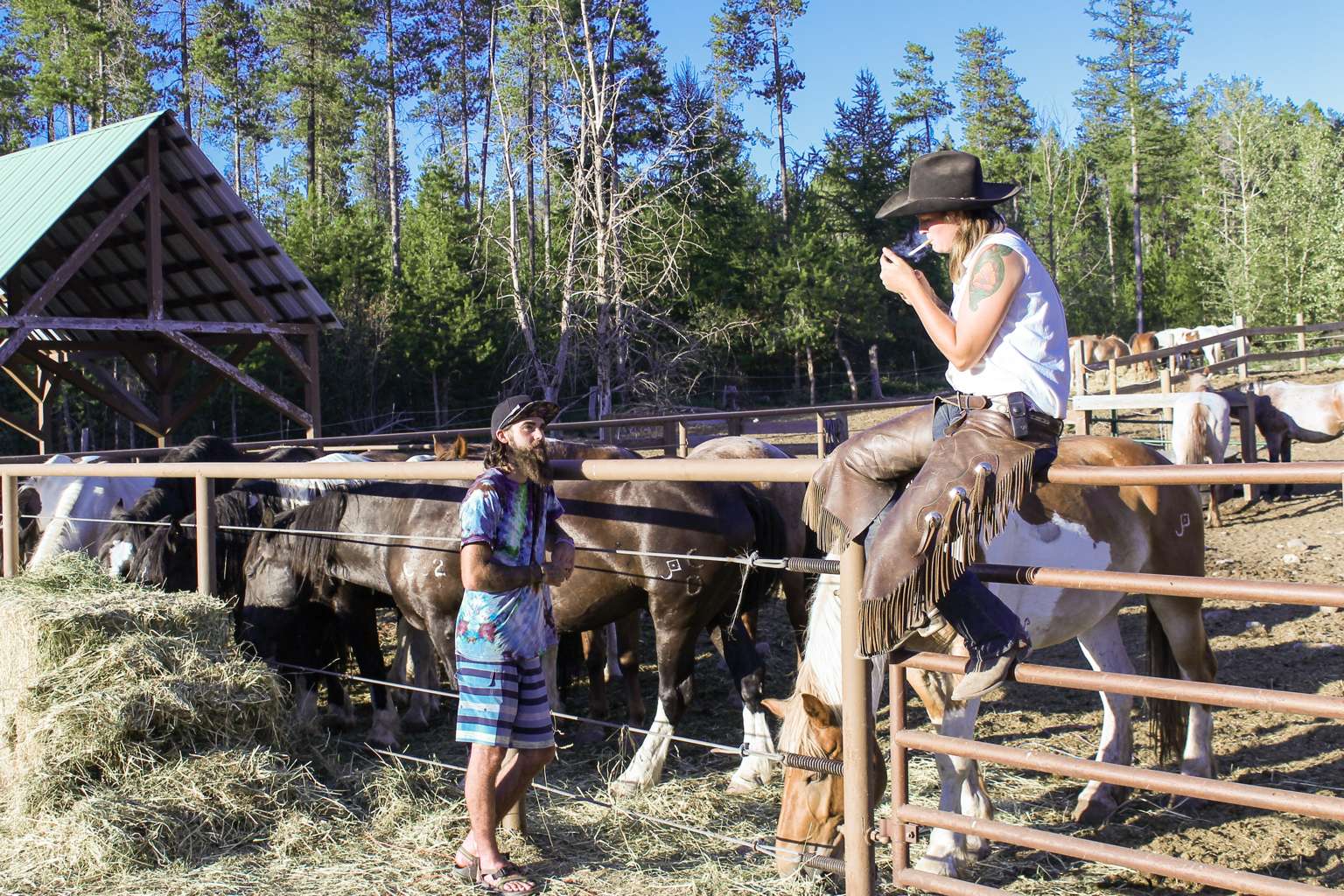 What I Learned From A Hippie And A Cowboy In Montana

I walked along the makeshift path toward the glow of a small fire. The smell of burning wood and marijuana filled the air and grew stronger as I neared the rag-tag group of people. A full moon illuminated the night sky and reflected against the surrounding mountains, each one taller and more rugged than the next.

As I approached the fire I could hear one of the raft guides, Jeff, with his flat-brimmed cap, tie-dye t-shirt, and full sleeve tattoos, telling a story about one of his trips down the Middle Fork earlier that day. He started giggling more as he reached the apparent climax of his story, though that could have been the beer in his hand. On his right sat Kristin, a wrangler from the horse corral, in her hoodie and shorts, a far cry from the cowboy hat, chaps and boots she’d been wearing most of the day. She rolled her eyes as Jeff kept on with his story, but smiled with only slight obligation.

Most everyone in the circle had a beer or hard cider in their hand, and I couldn’t help but be amazed at the differences, the variety of backgrounds, styles, life lessons, political ideologies of the group. Democrat, Republican, apathetic, pro-life, pro-choice, pro-gun, anti-gun, vegans, meat-eaters, recovering alcoholics (they had hot chocolate), functioning alcoholics, veterans, pacifists, gays, straights, atheists, Mormons, and everything in between.

On the surface, it seems as though this group wouldn’t get along at all, that the political ideologies and lifestyle choices would prevent them from understanding each other.

In the past couple months, the news has been bombarded with tragedy. From the terrorist attacks in France, to the anti-police protests turning violent, to Donald Trump becoming the President. It feels as though we can’t open our Facebook pages without a video of the attacks in Syria, a political meme demonizing the President and his staff, a memorial to one of the law enforcement officers who lost their life.

News outlets turn their 24-hour coverage to debates about gun control, the merits/lunacy of Great Britain leaving the European Union and the “monumental consequences” of their decision, the investigation of the President’s staff and their relationship with Russian diplomats, or whether the missile attacks in Syria signal the start of World War III. It appears as though our world is falling apart, and the media watches with partial glee.

In the late evenings, when the sun still hasn’t quite escaped behind the mountains, the biggest argument is over whether Marlboro Reds or Copenhagen Wintergreen is better, whether hard cider counts as beer, or who has the best weed in town. News of tragedy in other parts of the world isn’t met with arguments over gun control, the hypocrisy of one party or the other, or race relations in the United States. It’s met with collective respect and sadness for those who lost their lives, deference to the families who lost a loved one.

Showing more deference than most, Kristin lost her father at a young age and was raised by a single mother. Moving throughout central and southwest North Dakota, Kristin found solace in horses.

“Mom worked a lot to support my siblings and I, so if I wasn’t at school or at a friend’s house, I was with the horses …They were basically my babysitters,” she said.

After losing one of her favorite babysitters to the extreme cold of North Dakota, Kristin’s mother decided to trade the forty below temperatures for the more temperate northwest Montana climate. Though not all in Kristin’s family were ready to move.

“That move was probably the toughest … I was tired of moving, tired of being uprooted. I’d finally found a place in North Dakota where I felt like I belonged, so it caused a lot of friction between my mother and I … but I’m glad my mom brought me out here.”

After a couple of months, they both fell in love with the serene beauty of the Flathead Valley and Kristin settled into life in Montana. She kept a small group of “country-ish” friends throughout high school and was determined to teach them all to ride horses, at which she was successful at making them think they’re cowboys.

After graduating from Columbia Falls High School, she attended Flathead Valley Community College and graduated with an Associate’s Degree in Wildlife Biology. Wanting to continue her interaction with horses, she turned to wrangling during the summer and packing for a hunting outfitter in Colorado during the winter. The modern-day cowboy lifestyle.

“I’ll probably do seasonal work with horses until I’m no longer happy … Kids and marriage are kind of on the back burner for now.”

A couple states over, Jeff was adopted by his “hippie” second grade teacher after bouncing from foster home to foster home. After being taken away from his parents, Jeff grew up in Bellingham, Washington, a small college town thirty minutes from the Canadian border.

“[My parents] were real supportive… both of them were hippies, so they weren’t too strict. I had to do regular kid stuff like chores, but they didn’t believe in things like grounding me.”

A self-described “shy kid,” Jeff maintained a small group of friends, spending their time skate- and snowboarding and sharing in all the nefarious activities associated with the stereotype. Hating high school and the “principle of school in general,” he was able to get along with pretty much everyone, including the “preppies and hicks.” Despite his kind nature and affability, his people skills didn’t make school any more enjoyable, causing him to drop out during his senior year.

With Mount Baker a stone’s throw away and Whistler just across the border, Jeff sought escape from school through snowboarding. Coming of age during the reign of Shaun White, he still dreams of one day becoming a professional snowboarder. After briefly working construction in downtown Seattle — and hating every minute of it — he moved to Whitefish with hopes to fulfill his dreams.

“Once I got into snowboarding, [becoming a professional] was really all I cared about … I almost got sponsored by my buddy’s company … it’s still a goal even with all these young kids killing it. I still tell myself I’m a kid though.”

While visiting one of his friends on a snowboarding trip, Jeff fell in love with Montana and looked for a job at the mountain. After a short interview, he started working the ski lift at the local resort in Whitefish.

As the snow started to melt, Jeff was torn with what to do next. He applied to be a mountain bike guide but, as it turns out, his thick beard and tattoos didn’t fit the dress code necessary to work at the resort during the summer. Luckily, he fit right in with the raft guides near Glacier National Park.

“During the winter I could get away with the long beard and the tattoos on my hands, but during the summer I basically was laughed out of the interview. So a buddy of mine introduced me to the owner of the raft company and gave me a shot.”

Like Kristin, Jeff thinks he’ll stay in Montana doing seasonal work until he’s no longer happy, until he no longer enjoys it. “The day I’m not happy,” he says, “is the day I make a change.” Working the mountain during the winter, rafting and living in a campervan during the summer, Jeff is the quintessential hippie living the hippie lifestyle.

Jeff and Kristin are just a representation of the seasonal workers as a whole. Everyone has different ideas, different dreams, different paths to Montana. All somehow connected by living on very little, sleeping on air mattresses or in buses, praying for a good tip, all content and happy living in such a beautiful place, content with working hard day in and day out.

They find common ground in tales of struggle and strife, stories of love lost, love found, internal conflict and battling their own demons. As Kristin puts it, “after seeing what I’ve seen, and knowing my own internal conflict, who am I to judge someone else.” They understand the connection between the human spirit and the beauty of Montana, the beauty of the world. “As long as you’re a good [person],” says Jeff, “we’ll probably get along and have a beer.”

In a lot of ways, this small sample of people is a representation of Montana and its distinct political culture. Fifteen of the twenty-four governors elected to lead Montana have been members of the Democratic Party, yet since World War II, only three Democratic Presidential candidates have received Montana’s electoral votes: Harry Truman, Lyndon Johnson, and Bill Clinton (the latter only receiving them for one of his two terms). Even walking through downtown Kalispell, one can get a small sense of the distinct Montana culture. An organic food store sits next to the western outdoor store, tattoo and yoga studios adjacent to the feed store. The political leanings of native Montanans is as varied as the group of guides who flock to Glacier National Park every summer.

Instead of arguing over the humanity — or lack thereof — of one political group compared to the other, everyone seems to reflect on their own humanity, their own understanding of each other as humans. They embrace their differences and see the person as a whole. They understand that there will always be differences, always be arguments, but at the end of the day they share the common connection of trying to be decent people.

There’s a lesson we can all take away from the social dynamic of this microcosm: at the end of the day, we’re all people, all humans just trying to find meaning and purpose. There are things worth fighting for, things worth dying for. But even the most elite warrior needs respite, needs peace, if only for a moment. We can put away the differences, the fear, the hate, and simply just live, simply try to understand each other and find common ground. We can take a minute and understand the person behind the ideology, understand the perspective, the backstory, the history of each person and know we’re all trying to get to the same place, striving for the same sense of meaning.

As I walked away from the smoldering embers, my clothes permeated with the smell of smoke and spilled beer from animated laughter. Walking between Jeff and Kristin, my soul felt a bit lighter, my heart a bit fuller. All of us from different places, different backgrounds, different stories and yet here we were, sharing the same experiences, living the same dream-filled life.